This is, hands-down, without-a-doubt, undoubtedly one of – if NOT – the absolute best kit in the league and you’re oh-so lucky adidas decided to keep it around for yet another season. There’s really no point in touching this kind of flawlessness – let’s just re-run you through some of the subtle touches that elevate this kit to Conquering status. First, the star above the crest that reminds MLS that ATL are conquerors. Second, a “United” wordmark rests on the back neck with the “I” replaced with the Golden Spike. Third, the GA17 jock tag reps the Peach State and the club’s founding year. Fourth, we’re just about out of breath listing so much greatness. Atlanta, do not miss this jersey.

• MLS Cup winners star above the crest
• “United” wordmark on the back neck with the “I” replaced with the Golden Spike
• GA17 jock tag above the hem for the club’s founding year and, of course, state
• Replica – an officially licensed jersey that replicates the match-worn jerseys professionals wear. Built for the everyday supporter and features a looser fit and standard fabric technology. Sewn or embroidered crests make these very machine-wash friendly
• Climalite Technology – lightweight and built for warm temperatures, synthetic fibers push sweat from the body to the fabric’s outer layer, keeping you dry and comfortable
• 100% polyester
• Officially licensed 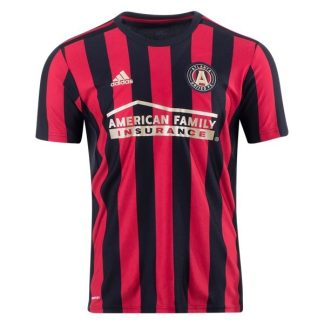