The King’s Kit arrives in ATL. The new away jersey for the 2020 season lands with a royal splash of gold on all applications – and it drips. Atlanta, this is your spirit, your city, your excellence, your swagger – bundled up in a clean jersey and topped off with embossed herringbone stripes and a metallic gold Unite and Conquer coin jock tag. And it’s all hammered home with the United Golden Spike featured on the back neck.

In celebration of 25 seasons of MLS, the Three Stripes are dipping into the archive to an inspiring kit from the 90s, when MLS first began. Kits across the league are taking on the EQT – adidas’ Equipment line – shoulder stripes as a touch of design flair. It’s an MLS Exclusive, adidas’ little birthday present to celebrate a quarter century of history.

• Women’s cut
• The “King’s Kit” with royal gold to rep the ATL attitude
• Embossed herringbone stripes down the front accompanied by a metallic gold Unite and Conquer coin jock tag
• Golden Spike featured on the back neck
• Replica – an officially licensed jersey that replicates the match-worn jerseys professionals wear. Built for the everyday supporter and features a looser fit and standard fabric technology. Sewn or embroidered crests make these very machine-wash friendly
• Climalite Technology – lightweight and built for warm temperatures, synthetic fibers push sweat from the body to the fabric’s outer layer, keeping you dry and comfortable
• 100% polyester
• Officially licensed 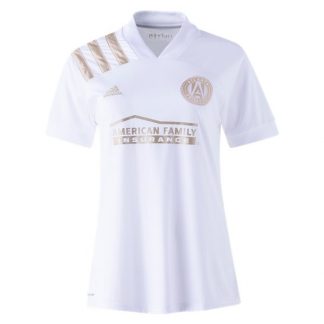