Citys 2018/19 campaign rivaled the season before with more historic accomplishments. Guardiolas men made English history by becoming the first team to sweep the domestic competitions, winning the Community Shield, the Carabao Cup, the FA Cup and finishing with a second straight Premier League title. Along the way, the Sky Blues won 32 games for the second year running, and, after earning a staggering 100 points in 2017/18, followed that up with 98.

On the clubs 125th anniversary, as the road to the three-peat begins, City will wear new kit supplier PUMA. The 2019/20 Manchester City Home Jersey is in the familiar light blue, but swaps out the traditional white accent with purple. A purple band is on the shoulders, and used for the logos. The club badge is sewn on, with “125 Years”” printed underneath. “”CITY”” is printed on the back collar. A blue on blue swirl pattern covers the front and back. 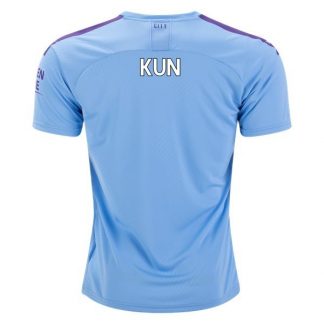