They celebrated him in the Kop, now they’ve put him on the kit! 2019 marks the 100-year anniversary of the birth of Bob Paisley – the legend, the footballing icon of Liverpool lore. With the Liverpool 19/20 Home Jersey, the Reds pay tribute by returning to the famous white pinstripes that glided down the front of his 1982/83 team’s kits and inscribing his signature on the inside of the neck.

The club crest and New Balance logo are touched with gold, and the kit features NB DRY technology, a moisture wicking fabric known to keep the heroes in red cool and dry well into extra time. With the club well and truly back amongst the top of both England and Europe, it’s the perfect kit to take Liverpool’s quest for triumph to the next level.

Made with class. Signed by winners. Built for ****ing giants.

• Celebrate and honor the 100th anniversary of Bob Paisley’s birth.
• Red pepper shade with iconic Paisley era white pinstripes on front.
• Featuring Paisley’s signature on the inside neck.
• Eternal flame sign honoring the 96 on the outside neck.
• 100% polyester.
• Officially licensed. 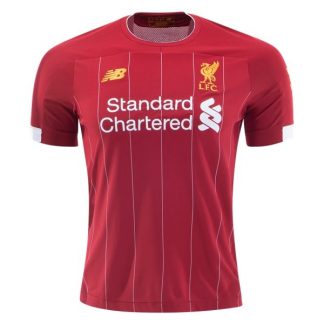