When Mikel Arteta became Arsenal manager in December 2019, he fulfilled not only his dreams, but also Gunners supporters’ hopes.

The Spaniard-turned-Arsene-Wenger-recruit-turned-Gunners-captain-turned-Pep-Guardiola-protégé has returned to The Emirates Stadium ready to imprint a new culture, a bold vision and a resurgence to the top in North London.

Join Arteta’s adventure and back the boss by wearing the No. 8 of his playing days on the first kits of his managerial era.

In addition to bringing back Arteta, Arsenal renewed partnership with fan favorites adidas in 2019.

For the 2019/20 Arsenal Home Jersey, the traditional red body and white sleeves have a new take on a classic look. The addition of red, white and navy stripes on the collar and and sleeves mimics earlier adidas designs worn in the 1980s. White adidas stripes are on the shoulders. The adidas logo is embroidered, the badge is sewn on. 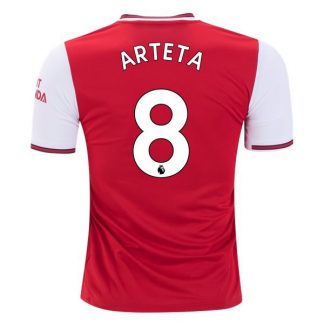